There are numerous ways in which water suppliers can find leaks across their pipe networks, but did you know that man’s best friend is one of the most effective ways these companies can detect problems where water leaks are concerned?

Specially trained sniffer dogs are now being used to great effect in Cumbria, with United Utilities hiring springer spaniels five-year-old Denzel and 18-month-old Kilo to help the company cut leaks by 15 per cent in the next five years, the News & Star reports.

The dogs are joined by handler Luke Jones on their mission to find leaks, hunting out the smell of treated water, which contains elements such as chlorine that they can sniff out. When they come across something suspicious, they then let Mr Jones know by freezing on the spot or sitting down and not moving. Kilo, although relatively new to the job, has already enjoyed huge success in his role, detecting a leak near Bassenthwaite that was wasting 3,000 litres of water an hour – or 72,000 litres a day! 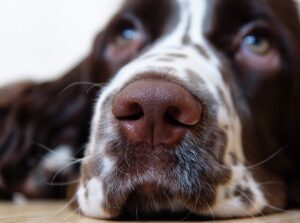 Luke Jones, who served with the Royal Army Veterinary Corp, said: “It was Kilo’s first find. He’s been working about three months now, we like to train him on the leaks that Denzel finds to see if Kilo can find them as well afterwards.”  He went on to say: “It is mental and physical exercise, the dogs work hard and at the end of the day’s work they are ready to sleep and relax. They are family dogs and live in the house with us, two terriers and another older working dog.”

Figures from United Utilities show that in the last 12 months, the company has succeeded in reducing leakage levels around the country by seven per cent.  Leakage manager with the firm Hannah Wardle explained that the firm is now making serious technological investments to help it further improve its leak detection and repair rates, including the installation of loggers that can listen out for the sound of escaping water and alert engineers to the problem.

One of the best ways for companies to save water and money at the same time, however, is to change business water supplier.

The English retail water market opened up back in April 2017, allowing organisations to choose their own supplier for the first time ever, bringing the market in line with that of Scotland, which opened up in 2008.

If you’d like to find out more about this, get in touch with the SwitchWaterSupplier.com team today.

The State of the Open Water Market in England

Any cookies that may not be particularly necessary for the website to function and is used specifically to collect user personal data via analytics, ads, other embedded contents are termed as non-necessary cookies. It is mandatory to procure user consent prior to running these cookies on your website.